The 4000m peaks, the giants of the Alps,
told by Ezio Marlier

Although their height is, in absolute value, half that of the maximum Himalayan peaks, the Four-thousanders of the Alps are real “giants”: majestic mountains rich in history. Even just the ascent of the normal routes is a serious test for every mountaineer, both for the high altitudes, for the difficulties and dangers of the glaciers to climb and cross, and for the rock and ice routes that must be faced to reach the tops.

The 4000m peaks are distributed along the western and central Alpine arc: the definition of the number was established by the International Union of Mountaineering Associations (UIAA) which indicated 82 peaks that exceed 4000 meters, located in three states: Switzerland, Italy and France . In particular, the views of the Aosta Valley have some of the most imposing Four-thousanders as a backdrop:
Mont Blanc (4810 m), a mountain carved in granite and second in Europe only to Elbrus, in the Caucasus; Mount Cervino (4478 m), with its characteristic pyramid shape; Monte Rosa (4634 m), the second highest mountain in the Alps; and the Gran Paradiso (4061 m), the only 4000 entirely included in the Italian territory.

Ezio Marlier, a mountain guide from Valle d’Aosta – in his long career he has climbed all the 4000 peaks in the Aosta Valley dozens of times – for many years he has had a good habit of sealing the ascents made with his clients by creating a short video that he sends to them as a souvenir . It is a sort of reverse Alpine Guide booklet (¹) with dozens of videos that Ezio Marlier allows us to publish and that we offer you periodically on this page.

We invite you to return to this page to discover the other “Giants of the Alps” told by Ezio Marlier.

_____
(¹) Until the 90s of the last century, the Alpine Guide booklet was the instrument that certified the work of mountain guides and was periodically checked by the company to which it belongs and endorsed by the political authority. In the booklet, in addition to the personal data of the guide and the regulations, customers noted the excursions and ascents, giving a personal opinion on the behavior and preparation of the guide.

In the wonderful world
of the Giants of the Alps 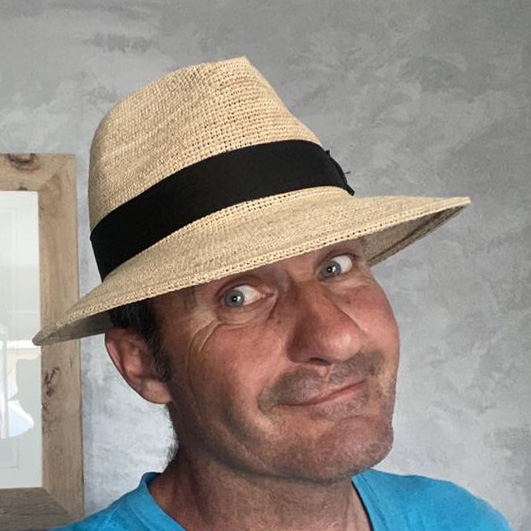 Ezio was born and raised in the Aosta Valley, he is a mountain guide and mountaineer.

For the climbs to 4000 in the Alps my shoes are AKU HAYATSUKI GTX.