Diego Toigo and Santi Padròs, from 13 to 16 June crossed the Pale di San Lucano in the Belluno Dolomites, which they named “Sangre y Corazòn”. Four days of long and complicated approaches with the ascent of 4 routes with difficulty up to VII + and the concatenation of 7 peaks. A great mountaineering adventure, never attempted before, in the wildest and most dizzying heart of the Belluno Dolomites.
Approach, climb and cross always with the inseparable Rock DFS GTX.

A large rocky massif, clearly visible from Agordo, with large walls that capture the gaze and the mind, defended by long and uncomfortable approaches and equally long and rough descents. Theater of a now little practiced mountaineering, the Pale di San Lucano still offer a perfect playground for those looking for adventure.

For some years now Santi and Diego have been visiting these walls, for them they are severe mountaineering, without compromise. What attracts them about the “Valley of Dreams” is its harsh, wild, almost primordial character.

The idea that Diego has had in mind for some time is to link the main peaks of this group in four days, climbing climbing routes in the first repetition and never returning to the valley. Diego immediately thinks of Santi as the right person for this project and Santi’s response is not long in coming: “Claro que sí tío, va-mos!”.

During the winter season the two define the battle plan to complete the crossing. In addition to choosing the routes, the most complicated thing is figuring out how to move from one Pala to another through the borài, the deep furrows that divide these mountains. Finally they have a plan, they will start from the Fourth Pala to end on the First.

from the diary of Diego Toigo, photo by Ruggero Arena

Sunday 13 June we arrive in Agordo at 5 in the morning and the Pale are there waiting for us, silent and imposing. I have never been on the Quarta Pala while Santi knows the approach and after 4 hours of climbing the hoof, between vertical woods and steep grassy slopes, at 10 we are at the start of the “Mario Tomè Bariza” route which climbs for 800 meters between the edge Gogna and Casarotto. At 5 pm we are at the top of the Quarta Pala. And one is done. A handshake, then off quickly to the Arco del Bersanèl and then up to Monte San Lucano. At 7.30 pm we are finally at our depot, just below the Passo del Ciodo where we set up the tent.

We wake up calmly, we imagine it is a quieter day but we have not dealt with the Boral of San Lucano. To reach the White Pillar you have to descend for about 500 meters along a gut between the imposing walls of the Second and Third Pala and succeeding is not so obvious, given the frozen snow that obstructs it and the waterfalls that we find at the bottom. Finally, after three hours of canyoning on wet rocks and snow slides, with a long traverse we reach the “White Pillar” route. The route climbs along some beautiful cracks and slabs on the left of the pillar. Once out on the Terza Pala we walk along the Milarepa ridges that take us to the top of the Spiz di Lagunaz. Here the descent, even if long and laborious, we know it well and in a couple of hours we return to our tent. After a good dinner and another fantastic sunset, we decide it is better to spend the night in the nearby Bedin bivouac.

The third day begins with the long descent of the Boral de la Besausega, the trail is devastated by the great fire of 2018 and the hurricane Vaia. Once we reach the bottom we still encounter a lot of snow which makes it easier for us to walk under the Second Shovel. Our plan is to repeat the “Via Flora”, but a light fog prevents us from seeing the line of ascent. After four pitches we realize we are not on the right track. We decide to continue on our line. The shots follow one another in a logical way up to the top of the Second Pala. The joy is irrepressible: we have concluded the third part of the traverse with a new route. We call it “Sangre y Corazòn”, the name of a song by my Patagonian friends Siete Venas from del Monte.
From the top of the Second Pala we easily return to the Bedin bivouac.

We get up around 6 with swollen hands, pains everywhere and the motivation begins to decline a little but now it is close. In short we are under the east face of Cima d’Ambrusogn, the highest of the Prima Pala. We start along the “Via del Diedro” and then continue along the “Via Raffaella”. The compact slab leading to the crack gives us a hard time but Santi manages to get through with dexterity. The following shots are really beautiful, it’s a pity we can’t enjoy them as we would like, the efforts are now being felt. A long traverse between the pines takes us out of the face, just below the Cima d’Ambrusogn and at that moment we realize that we have made it.
The great crossing of the Pale is completed, we remain speechless looking at the beauty that surrounds us; finally a big hug with Santi whom I will never thank enough for having followed me in this crazy idea, among these mountains that have entered our hearts.

difficulty up to VII+

Day 2 – III Pala (2355 m)
Descent along el Boral di San Lucano, and then go up on the opposite side up to the base of the east wall of the Terza Pala. Climbing of the east face “Via del Pilastro Bianco” (Vallata–Zeni–Zanon, 2018), difference in altitude 600 m, difficulty VII-. First repetition. From the top of the Terza Pala following the itinerary of the Creste di Milarepa to the top of the Spiz di Lagunaz (2331 m) and the Torre di Lagunaz (2296 m), concatenating the main peaks of the Terza Pala group. Return to the tent at Passo del Ciodo.

Day 3 – II Pala (2340 m)
Descent to el Boral de la Besausega. Second Pala, south-east face “Via Sangre y Corazòn”, height difference 850 m (300 of the base), difficulty up to VII. New way. From the top of the Second Pala to the Bedin Bivouac. 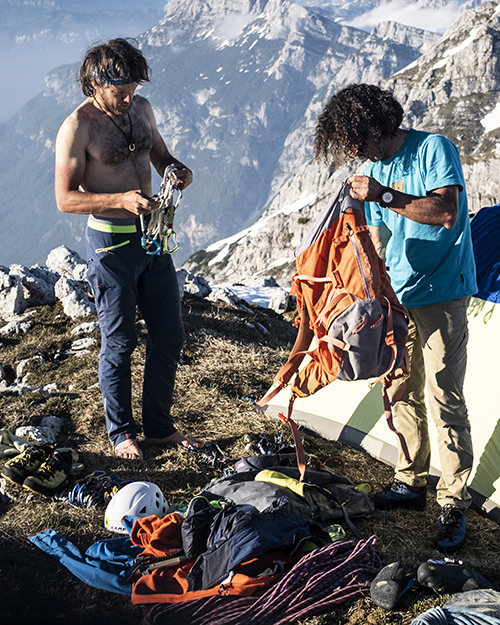 Diego Toigo and Santi Padròs during the 4 days of the crossing in the Pale di San Lucano used the Rock DFS GTX for the approaches, alternating them with climbing shoes on the most demanding routes.

The Rock DFS GTX have proved to be ideal for accompanying Diego and Santi along the complicated approaches in the Pale di San Lucano and on the long descents towards the valley, also excellent in climbing in the easier sections of the routes and in the exits to the peaks.

The Dual Fit System double lacing system allowed Santi and Diego to adjust the comfort and precision of the fit during the different phases of use, the Vibram Approcciosa sole with Megagrip compound proved to be excellent on every surface and extremely reliable even in overcoming the snowy stretches. 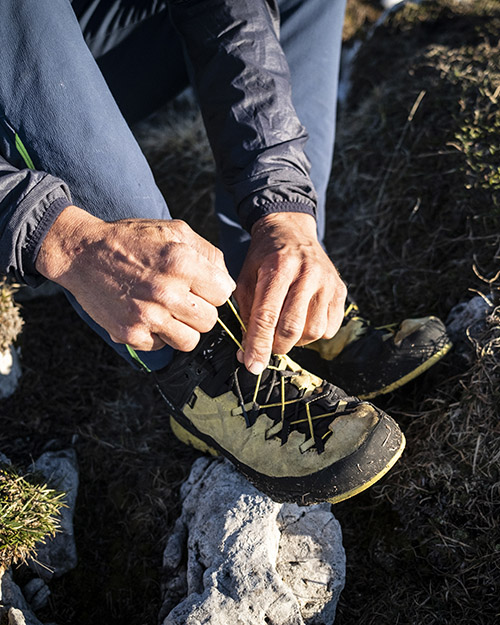 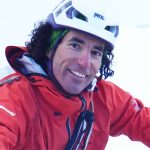 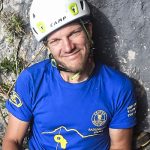 National instructor of the Club Alpino Italiano and president of the “Gruppo rocciatori Feltre”. Since 2001 I have climbed more than 300 routes in the Dolomites opening a dozen new routes including “I tempo cambiano” on the south face of Sass De Mura (Feltrine Alps) awarded with the Silla Ghedina award for the best new route in the Dolomites of 2017.

For approaches to mountaineering routes and descents, the Rock DFS GTX are the ideal footwear for Diego and Santi.

Everything is Lemonade in the Winds