The adventure of Peter Moser
to the roots of mountaineering

text by Teddy Soppelsa, photos and video by Alessandro Beltrame

Peter Moser, mountain guide and mountain athlete, shares with the mountaineering pioneers who first arrived on the Pale di San Martino the courage to realize their dreams and open up new paths. Like a modern explorer, Peter saw new possibilities within those mountains and with his fast and light style on 10 August 2021 connected six of the main peaks of the Pale di San Martino in the Dolomites.

From John Ball to Peter Moser

Shortly after the middle of the 19th century, when the first English travellers saw the Pale di San Martino, they were struck by the beauty of this Dolomite group, most of whose peaks were still to be climbed. From that moment on, the race to conquer them began. The first to be reached, in 1870, was the Cimon della Pala (3184 m), defined by John Ball as the Matterhorn of the Dolomites. Shortly afterwards it was the turn of Sass Maor, Pala di San Martino, Cima Canali and before the century of great revolutions ended all the main peaks of the Pale had been reached. Those aristocratic mountaineers were guided to the peaks by farmers and hunters from the Primiero area who, although driven by different interests, formed legendary groups which have made the history of mountaineering.

I went to the roots of mountaineering

“I could have climbed the most challenging routes, but I preferred to take a step back. I wanted to take everything out of my mountaineering and put the mountain at the centre. It wasn’t just a search for performance, in fact that was the least of my goals. It was also a search for my origins, as a guide and as a mountaineer. I went to the roots of mountaineering and I find this beautiful and important. I did it quickly, but without rushing, without a stopwatch. My objective was to live the adventure, not to measure time. It took the legendary pioneers 20 years to climb these peaks, but it only took me one day, thanks to their work and genius.”. – Peter Moser

CHRONICLE OF A DAY

On 10 August 2021, Peter Moser’s day starts very early. It is late at night when he sets off from San Martino di Castrozza, heads up to Col Verde and then along the Bolver-Lugli ferrata to the Fiamme Gialle bivouac. He continues along the normal route up to the summit of Cimon de la Pala (3184 m), the second highest peak of the Pale di San Martino after Vezzana.

He retraced his steps as far as the Fiamme Gialle bivouac, descended along the Val dei Cantoni, crossed the Passo Bettega, everyone was asleep at the Rosetta refuge and Peter headed straight for Cima delle Scarpe. In front of him is the Pala di San Martino, one of the most striking peaks of all the Pale, the normal route to the summit is long and laborious. On the summit, wide and flat, it goes around the bivouac of the Aquile and returns to the base of the route.

In the meantime it has become daylight and now Peter proceeds even faster towards the Pradidali Alto pass, crosses the Pradidali valley and goes under the northern edge of Cima Canali. Along the route opened in 1894 by the guide Giuseppe Zecchini with Wilfred Brodie, he reaches the summit. The descent from the summit is long and demanding and follows the route opened by the first climbers in 1879.

Peter’s thoughts now turn to the second part of the route. From the Pradidali refuge, along the cables of the Porton and Velo ferratas, he reaches the Velo della Madonna refuge and climbs to the base of Sass Maor, his next destination. The route he follows is the one opened in 1892, which later became the normal route. He retraces his steps to the base of Sass Maor and from Cima della Stanga descends into Val Canali along the Cacciatore equipped path.
At the bottom of the valley at Cant del Gal, he climbed up the Val Canali to the Treviso hut, where Peter took a short break to have a drink and say hello to his friend Tullio Simioni, who ran the hut. The steep climb up to the base of Sass d’Ortiga and the midday sun put Peter’s stamina to the test and his fatigue began to show.

Sass d’Ortiga was climbed for the first time in 1892 from the south-east face. Because of the beauty of the rock and the elegance of the line, Peter chooses to climb along the western edge, on the route opened by Fritz Wiessner and H. Kees in 1928. From the summit of Sass d’Ortiga he sees his last destination: the Piz de Sagrón. He then descends along the normal route to the Mughe pass and from there descends towards the Menegazzi bivouac and the pastures of the Cavallera malga. He climbs up on his bike, which he had hidden among the mughoes the day before, and rides to the village of Sagrón, at the head of the Mis valley.

Although the Piz de Sagrón belongs to the Feltre Alps chain, its proximity and morphology make it a continuation of the Pale di San Martino. It has the same alpine history as the Pale. In order to reach the summit, Peter decides to follow the Gabiàn route, a route that joins two historical alpine routes: the Detassis-Corti route of 1934 on the northern side and the route of the first climbers in 1877 on the southern side, which later became the normal route. In the late afternoon, Peter is on the summit of the Piz de Sagrón. To the north, he sees the Cimon de la Pala in the distance and, as he is not the type to get emotional, his eyes sparkle. 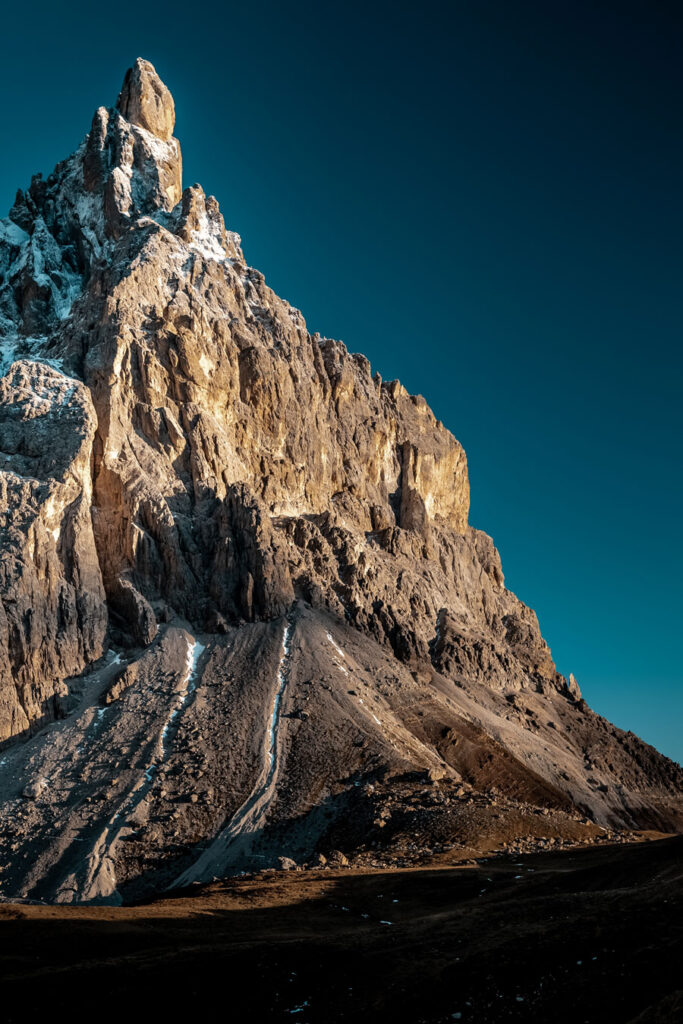 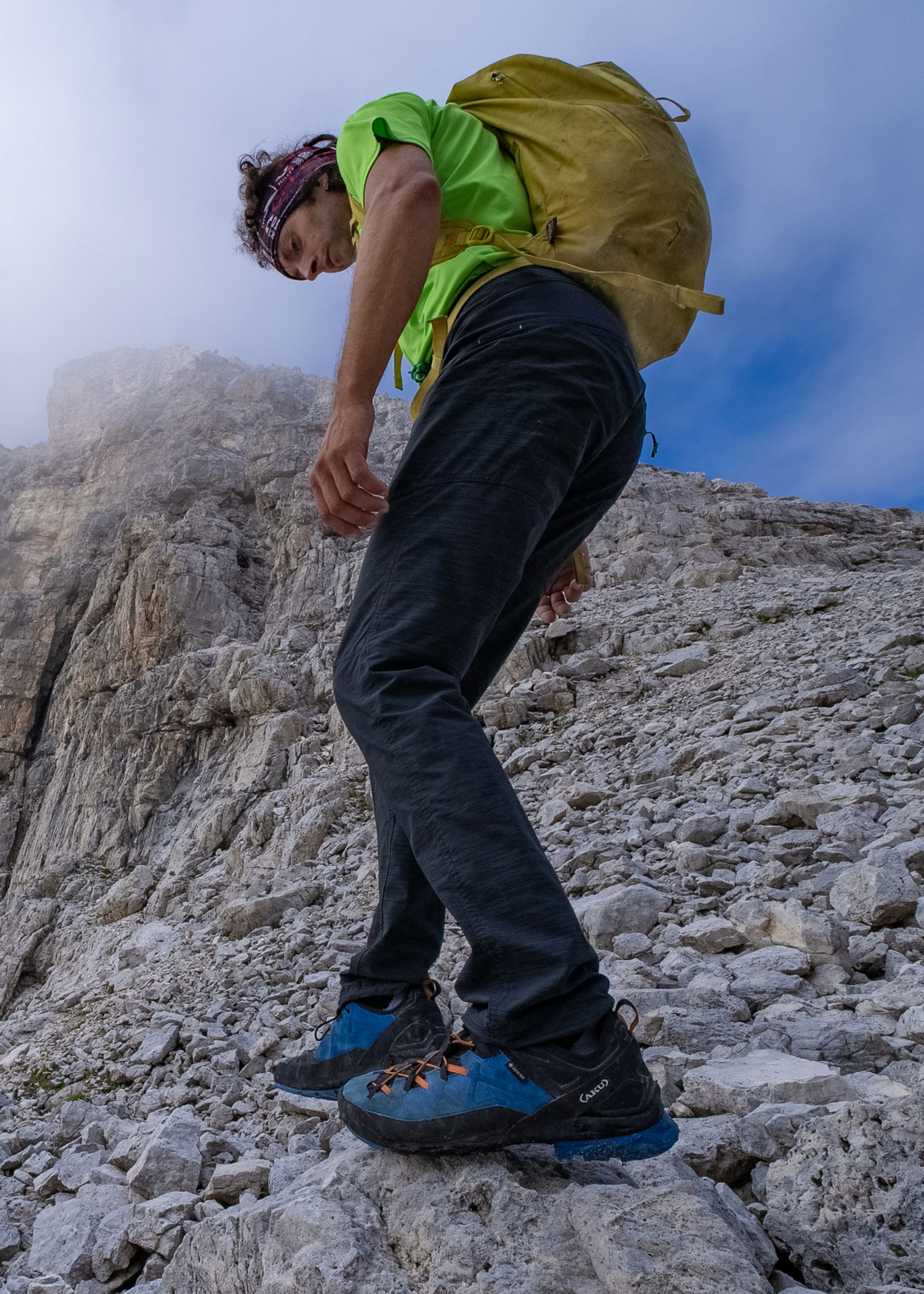 Peter Moser’s faithful companions on this great journey across the Pale di San Martino were the AKU Rock DFS GTX. A technical approach and lightweight climbing shoe, which Peter Moser helped to design, ideal for moving quickly on the trails and extremely precise and comfortable during all climbing sections. 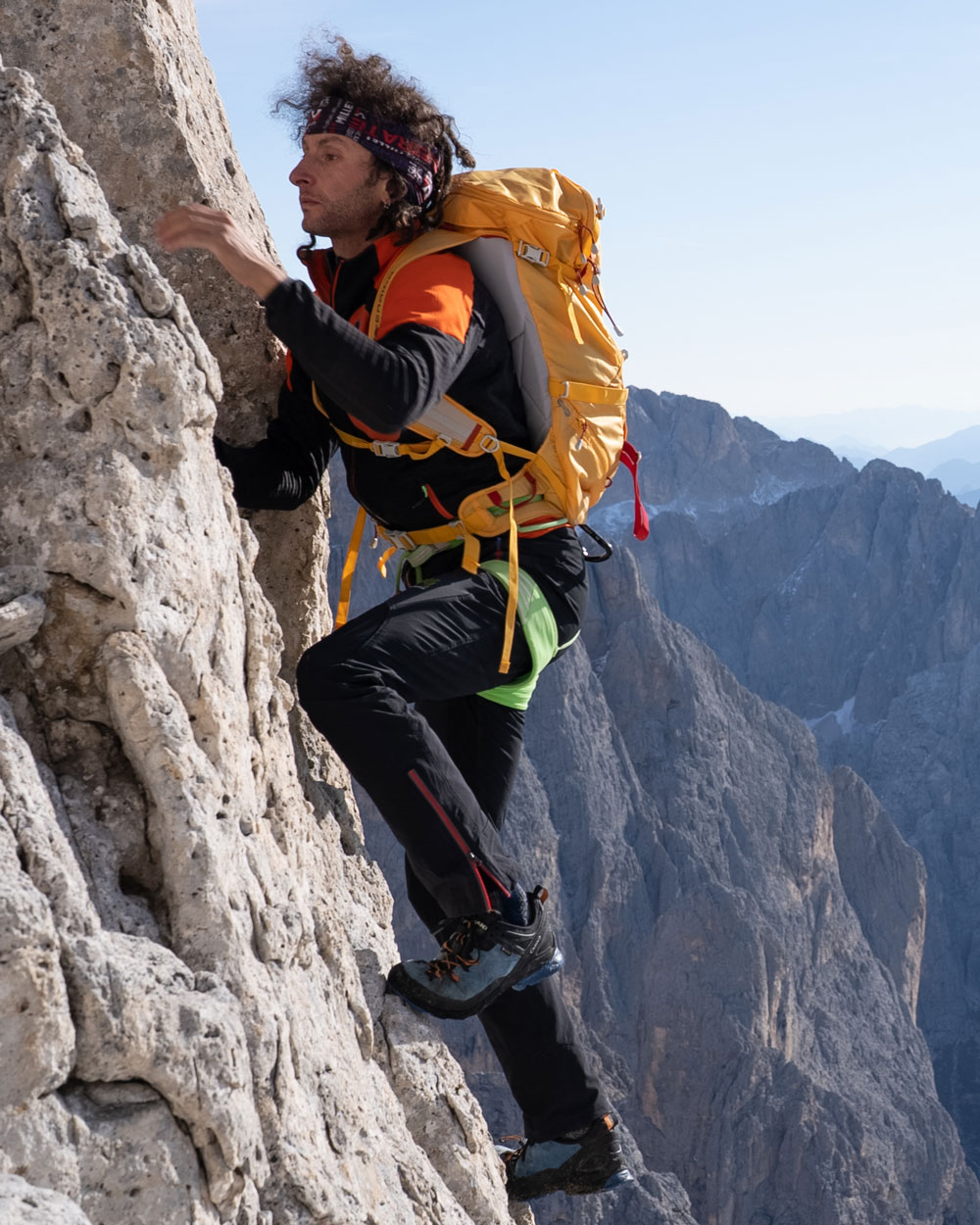 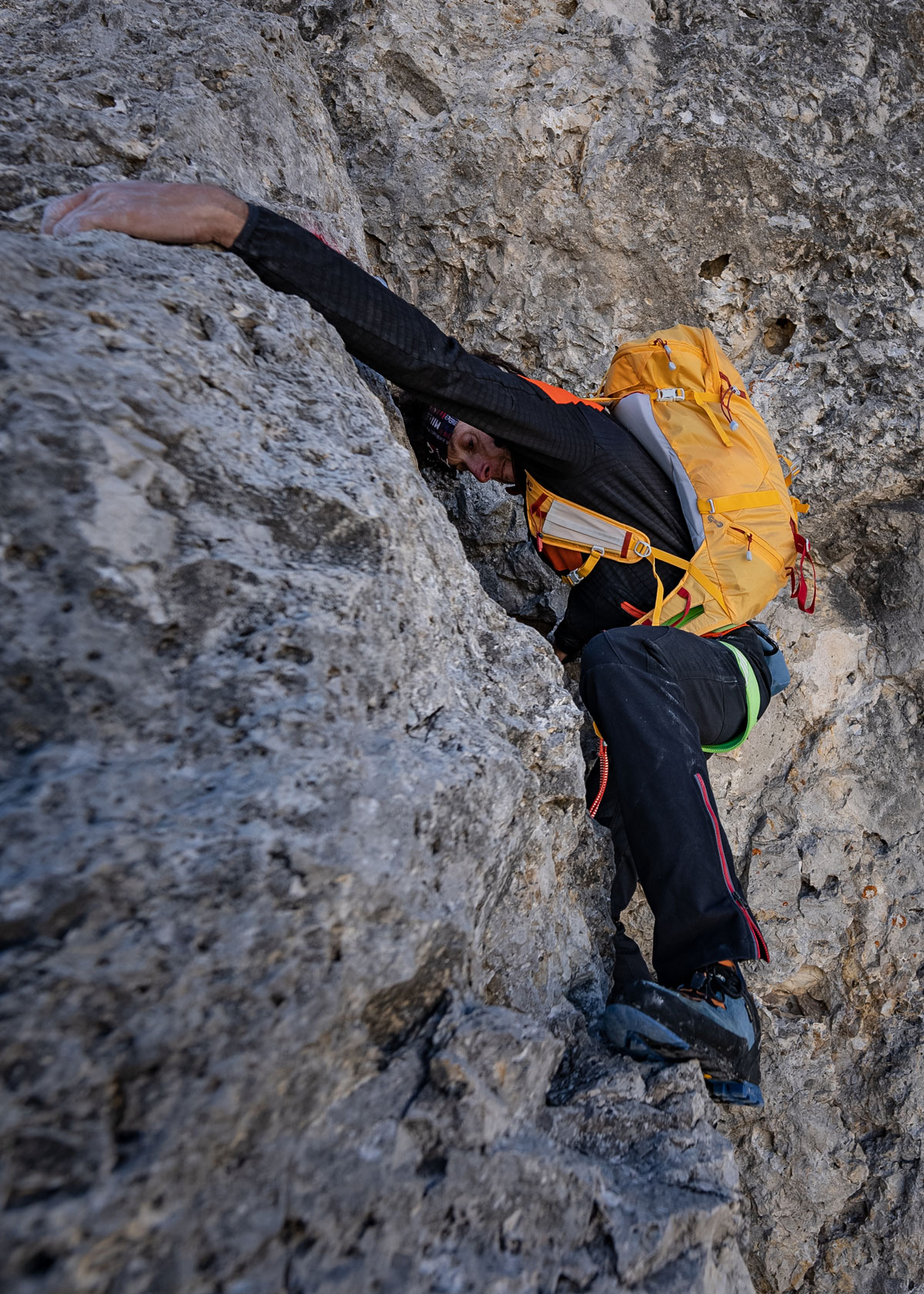 AKU Rock DFS GTX combines the features of a fast hiking shoe, light, comfortable and practical with the rigidity needed for climbing sections. The DFS system was designed by AKU to allow a quick and easy transition between climbing and trekking. The double lacing system makes the Rock DFS GTX closer to the foot and therefore more precise even on small holds.

Peter Moser is a mountaineer, mountain guide and mountain athlete with a versatile profile, able to express himself at high levels in any mountaineering context.

5 tips for enjoying the Shoulder Season